Did Jesus Just Say a Child 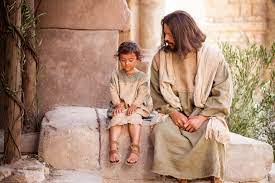 Written by Bryan Ruby
You have to love the twelve disciples. Handpicked by the Creator of the world to walk, not behind, but beside Him for three and a half years. To watch, learn, grow, and eventually turn the world upside down by what they’d discovered: that Jesus was in fact, the promised Messiah, and He’d come to save humanity—not by the power of sword and shield, but by the power of a bloodied crown of thorns.
And another reason to love the disciples . . . they were just like you and me: total misfits, broken, lacking, and sometimes dumber than a bag of hammers.
Case in point? The disciples come to Jesus and instead of being all pumped, let’s say, about a little girl raised from the dead by Jesus right in front of their eyes, they have something more pressing on their minds.
“Hey, Jesus, (most likely Peter) we’ve been wondering which one of us is the greatest in the kingdom of heaven?”
Cue the crickets. I can almost read Jesus’ lips. “Really? You’ve been with me 24/7 for months; watching leprous skin cleansed; blind eyes opened with spit and dirt; a few loaves of bread and fish turned into an all-you-can-eat buffet, and you guys are fighting over who’s number one?”
Instead of a deserved rebuke and a kick to their robed backsides, the Lord uses this as a kingdom—training session. “Jesus invited a little child to stand among them. Truly I tell you,” He said, “unless you change and become like little children, you will never enter the kingdom of heaven. Therefore, whoever humbles himself like this little child is the greatest in the kingdom of heaven (Matt 18:1-4).
I can almost hear the shocked whisper into Andrew’s ear, “Wait—what? Did He say this kid is the greatest?”
Parents, when you look at your little mini-me, or me’s, in their angelic innocence—not when they’re having a total meltdown at McDee’s or Walmart—what do you image Jesus wanted the disciples to grasp hold of as being the key to kingdom greatness?
It’s a simple adjective in verse four and the lack of it has plagued God’s created beings since the garden, and without it, continues to bring division, turmoil, and carnality into the very fabric of our day-to-day lives—HUMILITY.
My google dictionary says that “Humility is having or showing a modest or low estimate of one’s own importance; meek, respectful, self-effacing, submissive.
Let’s get back to those mini-me’s. What are some other child-like attributes you witness in your little ones that Jesus sees as kingdom worthy?
Trust:  Young children trust. Brea was three or four and had no fear of leaping off something tall or wide into my waiting arms, knowing I’d catch her. She had no reason not to trust me . . . I’d always caught her before.
Jesus was saying to be kingdom-minded, we have to put away our adult-sized fears. We have to trust, and sometimes—take leaps of faith like a child. I was born-again in a post-hippy church in 1972, and I can honestly say, Jesus has caught me every time I jumped. And even when He didn’t tell me to jump . . . He caught me anyway.
Innocence:  There’s something uniquely innocent about a one or two-year-old. They can be totally oblivious to the fact that running around naked with a diaper or underwear on their head is socially unacceptable. Adam and Eve experienced that same innocence in the garden until one bite of fruit opened their eyes. For the very first time, nakedness from mankind’s fallen nature caused them to hide from the Lord God.
What a joy to know that we are innocent because Christ bore our guilt on the cross. And it’s this pure and unadulterated innocence (that of a child) Jesus wants his disciples to embrace as kingdom-worthy
*Important side note: Please do not take the above example as a sign of adult innocence.
Unpretentious: The first adjective that came to mind when thinking about why Jesus used a child as an example was, unpretentious. All bets are off when your little girl comes out of the bedroom after dressing herself for church: two different colored socks, maybe a ballet tutu, and a lovely Monsters Inc. t-shirt. How about your little man: dressed in a Spiderman costume and holding his Children’s Storybook Bible in a webbed hand? Okay, you might be a little late for first service.
The point is: children don’t have a need to impress others with who they are, or that they’re better than anyone else.
In adult-ese, children seem to be comfortable in their own skin. They can cry because they dropped their ice-cream cone, then, laugh uncontrollably at the weirdest things. Wait, I think I just described myself.
Jesus wants us to be real, transparent, and free to be who we are as His sons and daughters—His children—comfortable in our spiritual skin. After all, we are made in His likeness. Maybe we should have a sign above our front door that reads, I AM A PRETENSE FREE BELIEVER.
Parents, and followers of Christ, His message was—and is, as simple as a child’s abandoned excitement in cradling a new puppy. We desperately need to exchange our adultness and become as children, because that’s when Jesus says we truly become part of the kingdom of heaven and find real greatness. And besides, it’s so much more fun!

For many of us, Christmas lights are the best and brightest part of Christmas celebrations.

Give Thanks and Remember

Some of the holidays we love the most are the hardest for others.

Did Jesus Just Say a Child

Jesus is the Reason for the Season

How many times have we heard that being said? Do our traditions show that we believe that?

Have you ever read the book “Alexander and the Terrible, Horrible, No Good, Very Bad Day”? Have you ever had one of those days? Maybe it’s been more like a few months or years. How do you choose to have an attitude of gratitude during that time?

Thanking God for Everything

When we thank God for everything, we are showing God that we believe He can use ALL things for His purpose and nothing is too big for Him.