An Instrument in His Hands 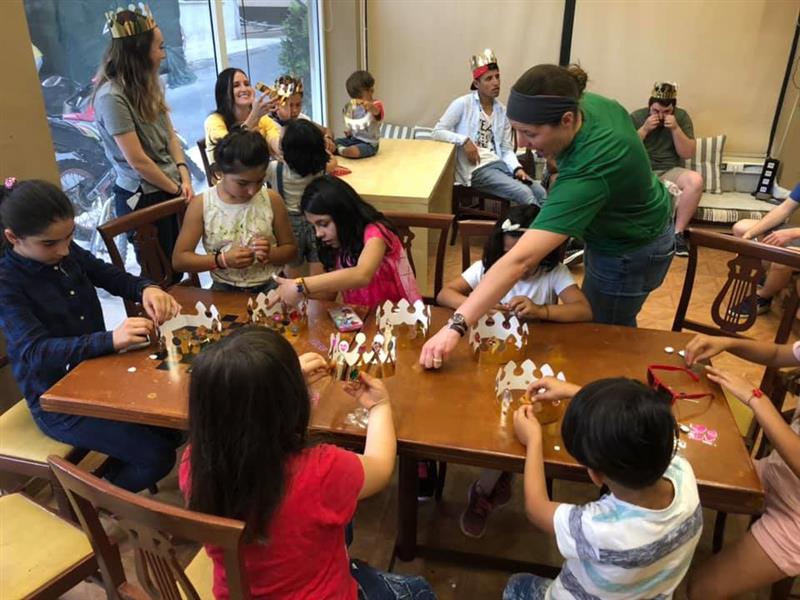 “Go therefore and make disciples of all nations, baptizing them in the name of the Father and of the Son and of the Holy Spirit, teaching them to observe all that I have commanded you.”
Matthew 28:18-20
At Bethel Church, we have the incredible and exciting opportunity to train, equip, and send out our disciples into the world as disciple-makers in fulfillment of Jesus’ command to go and make disciples of all nations. During the month of June, we’ve sent two teams to work and serve with our ministry partner AMG International in Athens, Greece.
The focus of AMG’s ministry operations in Athens at this point in time is on service to the local refugee population, as Greece has been flooded by millions of refugees in the last few years while their home countries have been torn apart by war. They primarily run their refugee ministry out of HomeSpot, which is a center for refugees to come where they can feel safe and loved. There are couches, coffee, books, games, charging stations and free wifi, TV for movies or video games, computers, and classrooms for the women to learn English and practical skills like weaving. The second week of June, a team of young adults from Bethel’s Collegiate ministry put on a VBS-style kids’ camp at HomeSpot, and the third week of June, a team of women put on a women's only day with crafts, makeup, and nail supplies, and also assisted in a distribution day with clothes and shoes for the refugees.
Athens is a strategic window to reaching people groups who historically have had little to no access to the gospel, since many refugees seeking citizenship elsewhere in Europe are funneled through Greece first. The opportunity to reach previously unreached people groups has arrived on our doorstep: we couldn’t go to them, but they are coming to us!
Although the two teams went with their focus on the women and children, many of the powerful spiritual conversations they had turned out to be with the young refugee men who like to hang out at HomeSpot. This turned out to be a great connecting point for the young adult team, since they were able to build relationships with refugees who were in their same age group. Here's an account from one of the Young Adult's team members, Jenna Billings, and her experience with a young man from Afghanistan:

“On our very first day in Athens, we attended a church service at HomeSpot where they invite refugees to come have lunch and hear teaching from the Bible. I ended up sitting next to a young man named Sarferaz, and after the Bible teaching, my teammate and I introduced ourselves and started a conversation with him. He had been a shopkeeper in Afghanistan, but had decided to move to Europe because of the violence of the Taliban in his home country. We told him a bit about ourselves and where we were from too, but that was where our conversation ended for that day.
On Wednesday, during our VBS, we saw Sarferaz back at HomeSpot. I recognized him, so I went to sit by him to talk to him some more. Since he’d been at the church service, I assumed he was a Christian, so I asked him a little more about his spiritual background. He told me that he just bases his religion on human rights. Understandable, considering the human rights violations he and so many other people from these war-torn countries have witnessed and experienced.
He also told me that he believes God gave people four holy books that he wants us to honor equally: the Quran, the Torah, the Psalms, and the Gospels, which is why he values Biblical teaching. I asked him what he thinks about the things that the Quran and the Bible say contradictory things about, like the deity of Jesus. He responded by saying that over time, the Gospels have been changed by man and thus become corrupted, and can no longer be relied upon for spiritual truth, so when there are any discrepancies, one must look to the Quran as the more reliable source of truth. (I found out later upon further research that he didn’t come to this conclusion on his own, but that this is the teaching of the Quran.)
Luckily, before we left for Athens, I had read through a pamphlet I remembered having been given on mission trip I’d gone on two years prior to Germany about how to navigate spiritual conversations with people from a Muslim background, and it provided talking points for this exact obstacle. It had recommended asking whether they thought the Bible had been corrupted before Mohammed lived or after, so this is what I asked Sarferaz. He thought it happened after, so I explained that we’ve found hundreds of manuscripts from hundreds to thousands of years before Mohammed lived, and they say the exact same things as our Bibles do today. The language barrier made it a little difficult to explain what a manuscript is, but he understood my point.
He was clearly skeptical, but I pray our conversation opened his eyes to his need to do further work in his search for spiritual truth, and think more seriously about the validity of Jesus’ claim to be the Way, the Truth, the Life, and the only way to come to know the Father. I believe God put that booklet in my hands for the specific purpose of bringing a small piece of truth to Sarferaz two years later that would spark a hunger in him for the greater truth of God’s Word.
Please join me in praying for Sarferaz and the other refugees we built relationships with and shared the hope of Jesus with in Athens. Pray also about going to serve with AMG for yourself: Bethel will continue to send teams there in coming years and there is no experience like knowing you’re being divinely used by God as an instrument in His hands in someone else’s spiritual journey.”

Missionary and Partner Support during COVID-19

Information on how ministries around the world are managing the pandemic.

As followers of Jesus, we are all called to pray. We should be praying for those in our communities as well as those around the world. Some are blessed to be able to help financially send people around the world to share the love of Jesus ...

Here are the prayer requests from our Bethel Missionaries as 2019 comes to a close! Let's be praying for our partners as we celebrate a new year!

This is the biggest mission leadership conference in the Pacific Northwest!