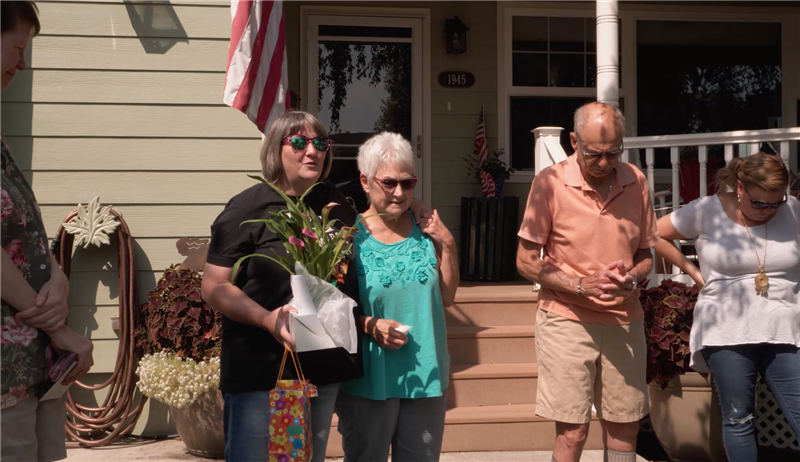 Flash Mob Bless: a spontaneous opportunity for Bethel members to show up at the home of a Bethel family in need, to love and encourage them.
In 2017, Gay Fitzgibbon was diagnosed with Ovarian Cancer. After some treatment the cancer went away, but shortly after, her husband Davis, fell and broke his pelvis. In 2019, Gay's cancer also came back. A Flash Mob Bless group visited the Fitzgibbons at their home and blessed them with hugs, gifts, prayer and encouragement.
After the experience, Gay wrote: "You are an amazing blessing! We had been a little discouraged, but, after the flash Mob Bless we were so positive. God knew we needed that hug from so many caring brothers and sisters."

A world-wide movement changing Valentine's Day weekend from simply a celebration of love to a celebration of the value of life and of God's love for people with special needs. It's a night when all guests are kings and queens of the prom.

Precious in His Sight

Most who grew up in Sunday school might remember singing this children’s song written in the late 1800’s by Christian pastor C. Herbert Woolston. We need only look to the beauty of Psalm 139:13-16 to understand the truths ...

Just as Jesus was a gift to us, we share His love by giving to others!

In 2017, Gay Fitzgibbon was diagnosed with Ovarian Cancer. After some treatment the cancer went away, but shortly after, her husband Davis, fell and broke his pelvis. In 2019, Gay's cancer also came back ...

I Will Be With You

When God asks us to be a "mighty warrior", we never go into the battle alone.

Our July local outreach focus is on those who are incarcerated in the Benton County Jail. We are hoping to purchase some workbooks, bibles ...