Starting the Conversation about Suicide 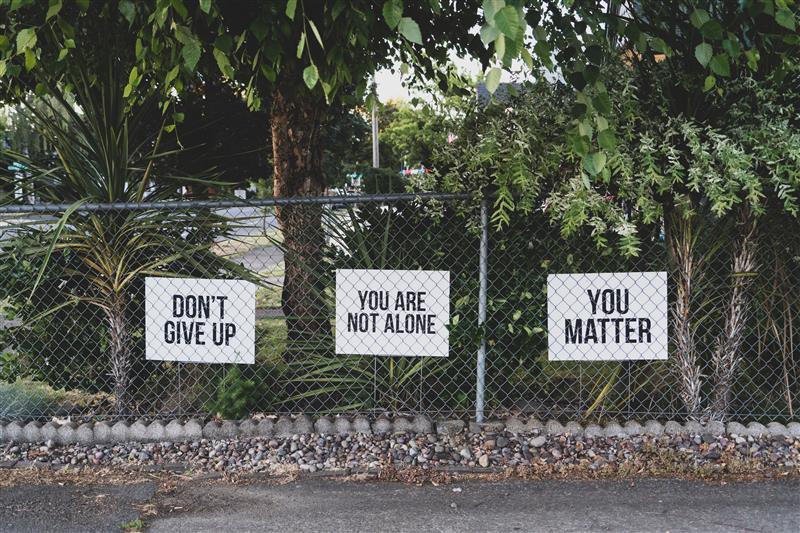 by Jessica Wallace
I was recently asked why talking about suicide loss can often feel like gossiping, as if we are sharing information about a family that we aren’t supposed to. Like other tragedies linked to mental illness and addiction, suicide loss carries stigmas about the individual who died by suicide and their family, stigmas that are often misleading and not at all true.
All loss is hard, but one of the hardest losses to endure is suicide loss. It’s tragic, heartbreaking, confusing, and coupled with trauma, can often lead to complicated grief. The stigma of suicide creates barriers for families impacted by suicide loss to receive the support and care they need because often those around them are not comfortable talking about it.
But we should be talking about it. We should be talking about how hard it is for a family to recover from suicide loss, about the lack of support for individuals living with depression or other mental health issues, and we definitely should be talking about how to recognize someone who is hurting and what each of us can do to help. Part of the reason it can feel shameful to discuss suicide is because we don’t know what to say, so we don’t say anything. But there’s a better way. There is hope.

From 2000-2016, the rate of suicide in the US increased 30% (Hedegaard, Curtin, & Warner, 2018). Locally, the overall suicide rates in Benton and Franklin counties are higher than the state average (20.11 per 100,000 and 17.1 per 100,000 respectively*). Numbers aside, many of us know someone who has personally been affected by suicide. How do we help those who are hurting? How do we bring hope and help to those who need it? We can start by dismantling the stigmas and myths that surround suicide and bring light to this often misunderstood mental health crisis.

One of the biggest myths about suicide is that asking someone if they are thinking about suicide will encourage suicide attempts. This has been proven to not be true (Gould et al., 2005). For those who would still be hesitant, I would pose the question, “what does it say if you don’t ask?” By not asking the question, are we really communicating that we care about that person? If they are showing signs of depression or saying or doing things that concern you, how does not asking convey care and support?

However, the way we ask about suicide is also important. This is where quality training can help someone know how to address the issue directly and ask in a way that is clear and kind. We all hope that we will never know someone struggling with suicidal thoughts, but statistics tell us that likely isn’t true. You never know when you might encounter someone who is struggling, it could be a coworker, friend, small group member, or even a family member. Knowing the signs to look for, appropriate ways to intervene, and resources to help are all important to helping prevent suicide and getting people the help they need.

Jesus did not shy away from the hard topics. He challenged people’s beliefs about forgiveness, sin, and loving others. Jesus embraced those who were hurting. He reached out to those who society at the time deemed unreachable, and gave them hope. Hope is the beacon of light that hurting individuals need in a time of crisis. As followers of Christ, we carry that same hope. There is hope. Hope for those struggling with suicidal thoughts, hope for the family grieving a loved one who died by suicide, and hope for our community to seek to understand suicide and work towards education and training that will help prevent suicide.

A good first step to loving others and helping those who are hurting is to learn more. As a church, Bethel wants to help you become educated and equipped in this area. Join us on February 8th for our next Equipped to Care event on Suicide Awareness & Prevention. We will hear from Dr. Kay Bruce, Counseling Director at Western Seminary and certified suicide prevention trainer. She will be presenting a high-quality, proven suicide prevention method and sharing how to care for families impacted by suicide loss.

There is hope. There is help. Let’s talk about it. We are willing to start the conversation to learn more about suicide awareness and prevention. Will you join us?

Starting the Conversation about Suicide

I was asked recently why talking about suicide loss can often feel like gossiping, as if we are sharing information about a family that we aren’t supposed to. Like other tragedies linked to mental illness and addiction, suicide loss carries ...

Being Honest with Holiday Grief

Written by a Bethel GriefShare volunteer, this is a letter to anyone who may be struggling with honestly sharing difficult emotions this holiday season in the midst of grief and loss.

Hope for the Holidays

The holiday season is right around the corner and if you are grieving the loss of a loved one, you might find yourself wishing you could just avoid the holidays all together and wake up once they were over ...

I Will Send Out an Army to Find You

Your church wants to “be with you” if you or someone you love is struggling with an addiction. Jesus cares for you and He’s here to help.

A fellowship of women with loved ones suffering from addiction who share their experience, strength, and hope by practicing the Twelve Steps and giving encouragement to each other through our faith in God.

Chronic pain is often invisible, making it likely to be misunderstood by others. This is where having a Chronic Pain Support Group can make a huge difference. Come and join us to be encouraged, supported, and prayed for!